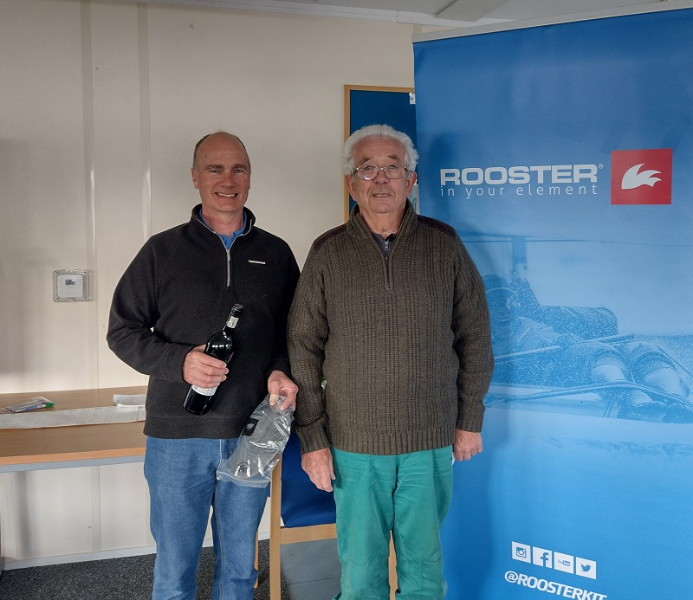 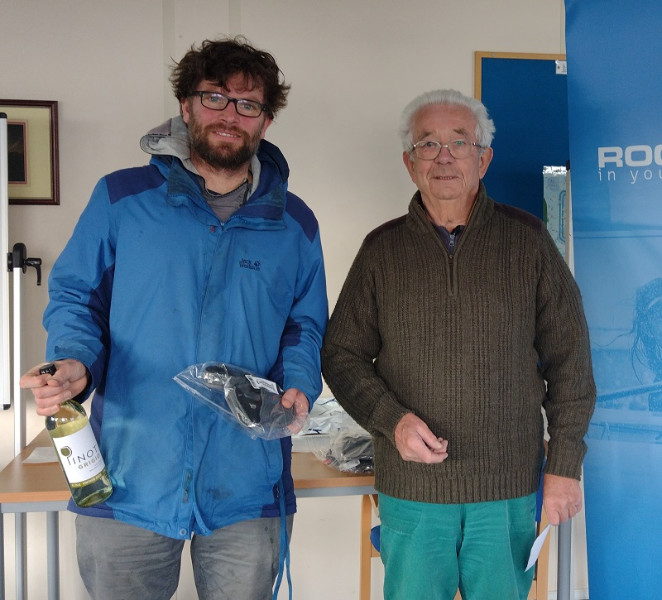 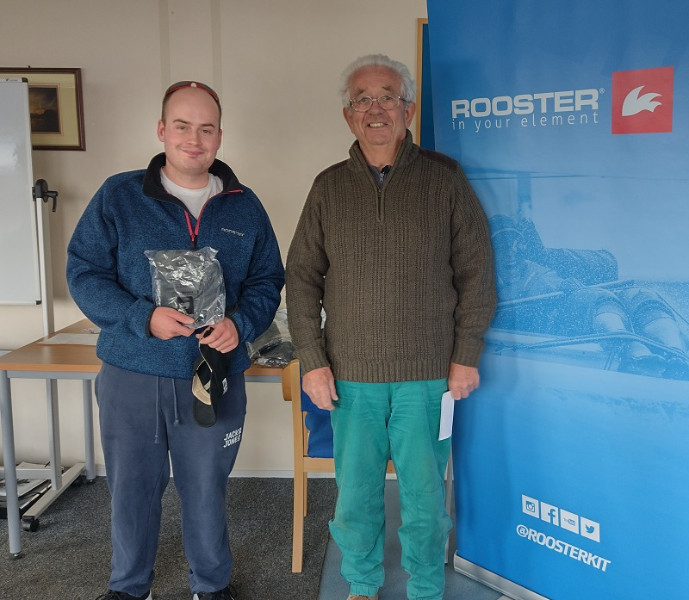 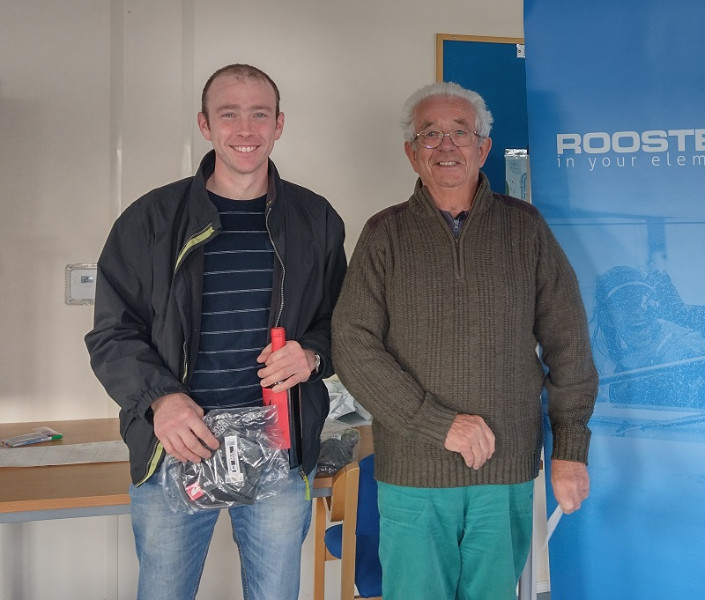 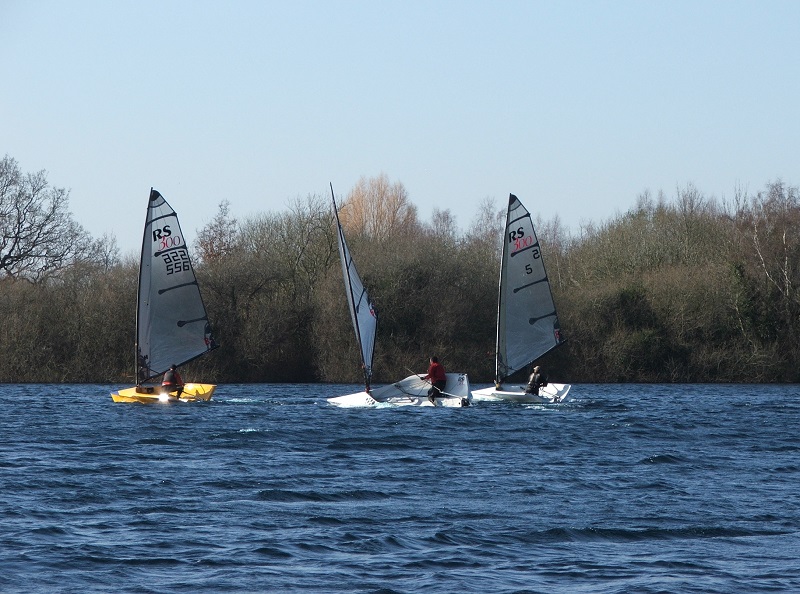 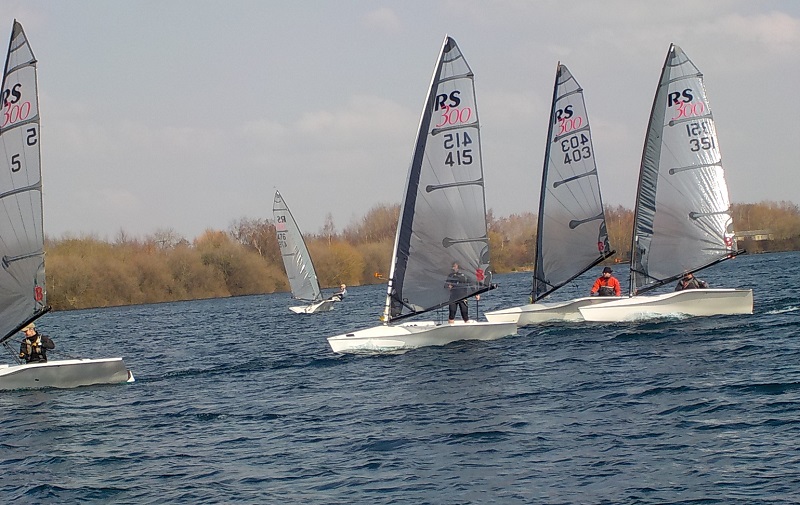 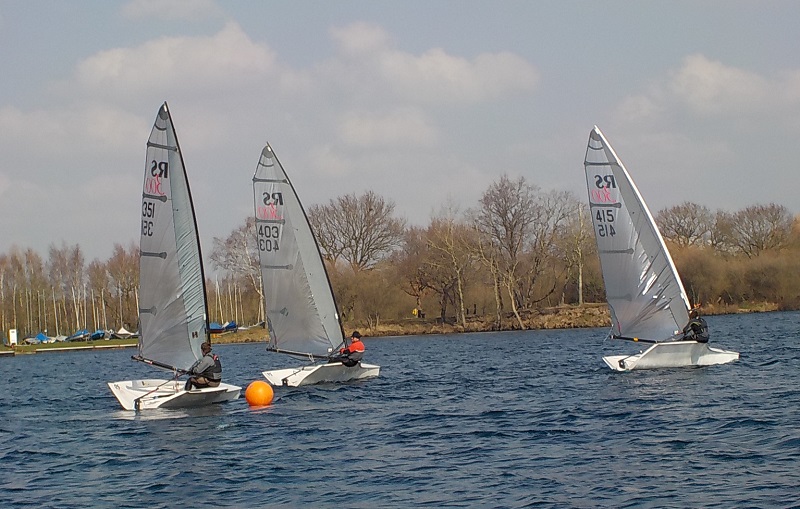 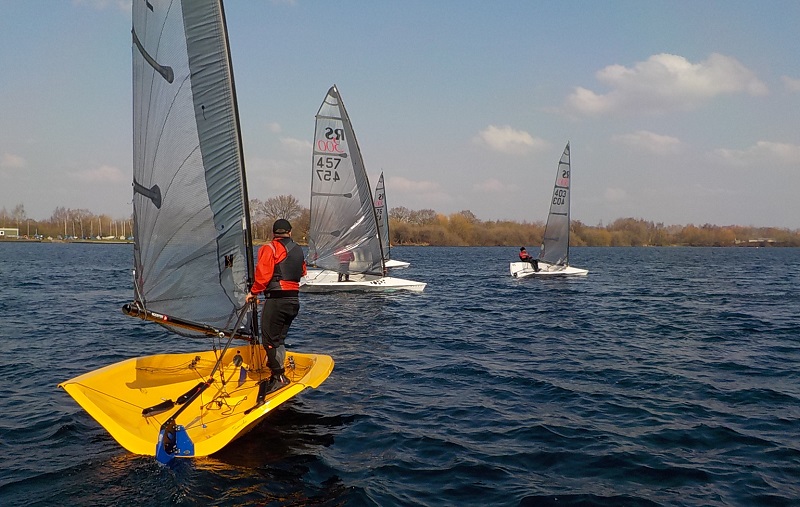 It's safe to say the winter of 2021/22 had been pretty naff for sailing.  Countless named storms, cancelled events and extreme weather put paid to much of the RS300 Rooster Winter Series which instead would be decided at Hykeham Sailing Club.

On the Saturday morning, a small fleet of RS300 sailors began to emerge from the compound.  One of whom could be seen furiously scrubbing his boat before launching - certain that no involuntary washing would be done during the racing.  It transpired that this was the ceremonious arrival of the rare Luke Pepper, only perturbed by the aftermath of some wintering rodents that had taken a liking to essential equipment.

On the water it was clear the official last day of Winter didn't want to let go.  A cold Easterly of 15-25 knots and blue skies meant a challenging day of racing was on the cards.  The club weather station actually read 44.4 knots at one point - a big ego boost for all involved, even if it should be taken with a pinch (more like buckets) of salt.

Race one got away cleanly, especially so for Mr Pepper who nosedived spectacularly whilst bearing away behind the committee boat - evidently looking to improve the finish of his earlier scrub down.

Up the beat Steve Sallis narrowly missed being T-Boned by the not-so-in-control Pete Mackin who completely misjudged a tack and ended up the second swimmer of the day.

At the front, Mark Schuerch and Robin Jones were leading the way by quite some margin.  That lead extended after Sam Davy missed his toestraps at the end of the first lap - much to the entertainment of Rob Ford who was otherwise regretting his decision to reef in this race.

Conditions were brutal with massive shifts and gusts taking no prisoners.  A full lap, which included two nerve-wracking gybes, took only 7-8 minutes (trust me it felt like 20).  Despite this and with no capsizes to his name, Robin took an impressive victory in race one.  On the other hand, Mr Sallis picked up the baton of most capsizes with five in this race alone and would have been a contender for wooden spoon if Mr Mackin hadn't made another misjudgement and swam desperately after his boat having jumped out a bit early on the way in.  Pete finished second with Mark third.

After a generous lunch put on by the team at Hykeham (thank you!) the fleet launched for two back to back races.  Demonstrating that dinghy cleaning is a three stage process, Luke promptly nosedived again, collecting the committee boat as he did - another wooden spoon applicant?

Races two and three were getting lighter but not much easier thanks to wind shifting round the trees.  Some of it resurrected memories of a Winter champs at Sheffield Viking that Mr Pepper had recorded in years past (video here).  This time though Steve Sallis took control over the race after a battle with Robin.  Mackin, Pepper, Schuerch, Ford and Davy completed the fleet.

In race three Sallis again took a commanding lead but was hunted down by Luke Pepper.  Despite Luke's relentless efforts, Steve took the race in a photo finish by a few inches.

The evening was spent in the pub a short walk from the club (like we needed the extra exercise!). And whilst the process of ordering food was longer than some races we’d had and the looping playlist in the bar was from the dregs of an 80's skip, a great evening of banter and rugby watching (great?) reminded everyone how fantastic the social and sailing side of this fleet is.

After the customary evening of pub grub and beer the sailors arrived early for day two to a glorious Spring like morning with less wind than day one but still enough to whet the appetite. Breakfast was accompanied by a full comparison of notes on who had the most aches and pains from the previous day and the revelation that Class Chairman Mackin had arrived at the meeting without a watch and opted to just count to 60 after the one minute gun on the previous day.

At the morning briefing at 1000hrs Peter Bayliss, the PRO, instructed that the course would be the same as day one with the first signal 30 minutes after the briefing.  As the sailors launched and got to the sailing area it became clear that's it was much more difficult for Mackin to count consistently up to 1800 (the 30 minutes between briefing and the first gun,) it appeared the class chairman was going to miss the start…

As the fleet collected at the line, Mackin launched and cast off from the bank.  At the gun the majority of the sailors held starboard tack.  Mackin arrived on port and crossed behind the fleet. This would play out relatively well later as he slotted in mid-fleet at the top mark.  Pepper who had consistently proved that he couldn’t sail a first beat would again also have to fight through the closely matched fleet with Mackin.  Mackin got up to second behind Sallis but couldn’t quite manage to outthink Sallis’ strategy.  Pepper settled for 3rd after a close battle with the leading duo (and gybing from starboard onto port to avoid Sallis and Mackin’s approaching on port tack #Rusty).  Schuerch 4th, Ford 5th, Jones 6th and Davy in 7th were all close behind.

With next to no gap between races due to the tight fleet race five started with Sallis, Pepper and Jones kept left while several others tacked off and went right.  On this occasion right was the way to go putting Mackin and Ford comfortably clear at the windward mark.  Sallis however would now have to work extra hard if he was to match his previous 3 bullets as he rounded the top mark low down the fleet with Pepper and Jones.  These three made their way with plenty of jostling up to 2nd 3rd and 4th places respectively with Mackin far in the distance after breaking early.

Race six saw Sallis back at the front but hotly contested by Mackin for the whole race with the two testing their match racing skills.  Pepper and Schuerch had a similarly close battle with Schuerch in 3rd for the majority of the race only to get pipped late on in the race by Pepper taking advantage of a wind shift on the run.  Ford was 5th and Davy was 6th.  Jones must have forgotten his Weetabix and did not start the race.

Thanks must go to the team at Hykeham Sailing Club for hosting a smooth, friendly and entertaining event, as well as organising fantastic weather for us.  Thanks also to our tirelessly supportive sponsor Rooster Sailing who have supported the fleet with the help of the RS Class Association for many years and will continue to do so at our first RS300 Rooster National Tour event: the RS Sprints at Rutland on 2-3 April.  You can find all the event info here

Photos thanks to Hykeham SC