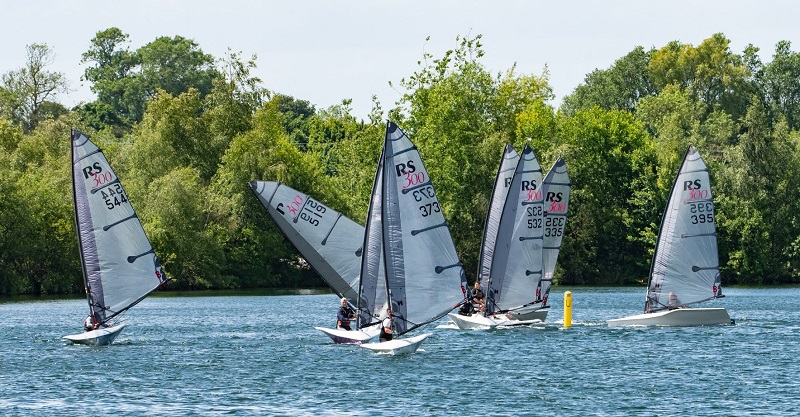 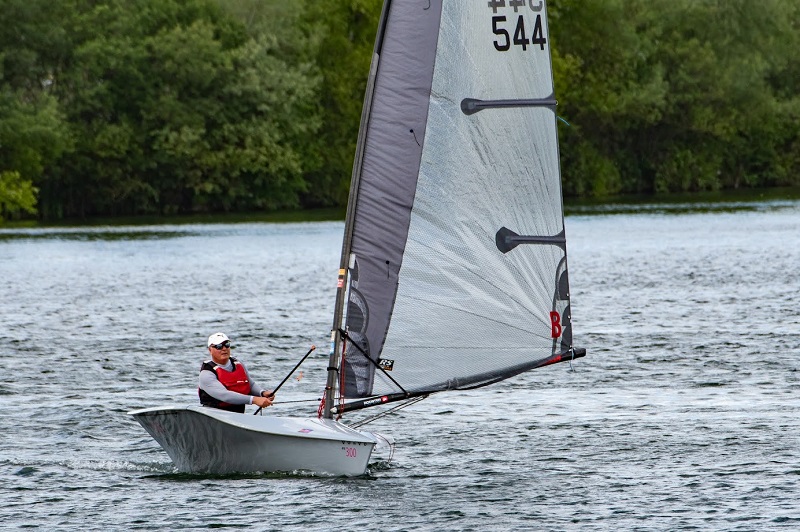 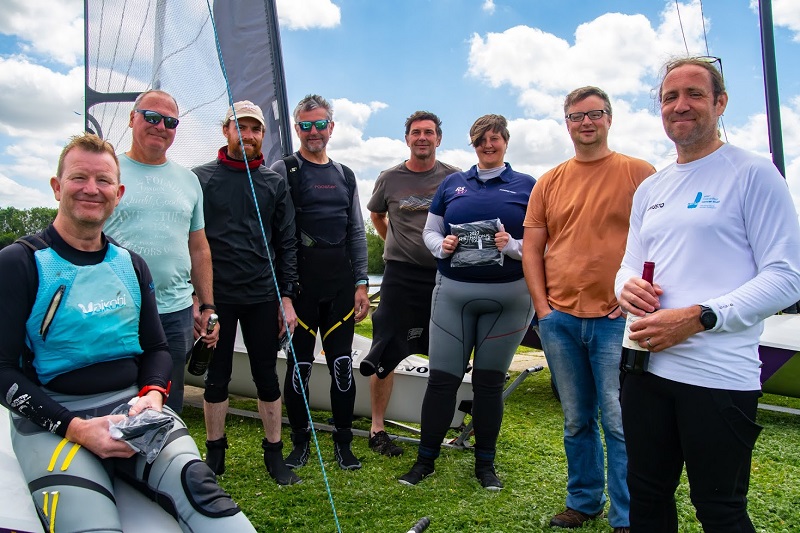 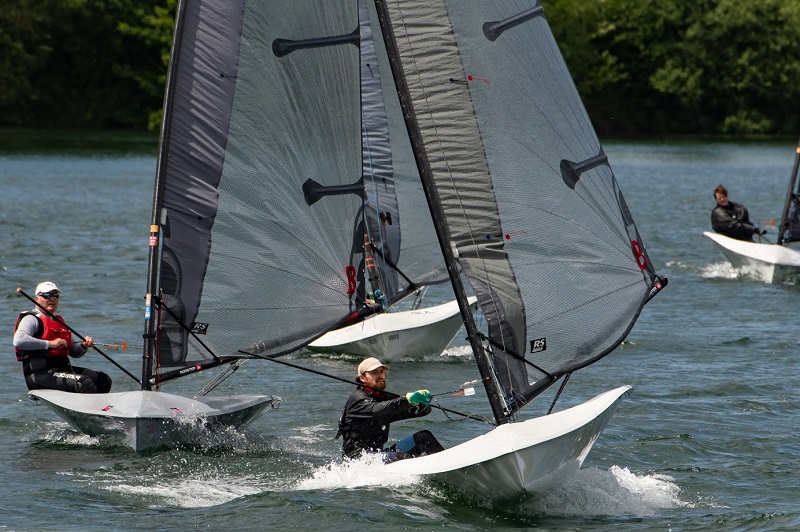 There are pros and cons of hosting an RS300 event.  On the plus side you don’t have to get up at silly-o-clock in the morning to collect and pack up your boat then drive half-way across the country.  On the downside there’s the anxiety about what my club will make of this invasion of people whose boats won’t stay upright without assistance (or is that boats whose people won’t say upright?) and what will my RS300 friends think of my rather modest and homely club with the interesting sailing area and idiosyncratic wind shifts.  As it turns out both the RS300 fleet and the Whitefriars fraternity both did me proud and provided a fantastic weekend of racing and sailing camaraderie.  The lake however remained its usual mercurial self, providing joy and despair, often on the same leg of the race.

We kicked off the proceedings with a briefing at 11am from our superb race officer Dave Whittle who explained rocks, shallows, fishermen and other hazards.  The wind was a healthy 15-20kts which periodically gave us gusts in the high 20s.  At the start of the first race there was a strong Port bias to the line so I thought I’d go for a flier.  I saw Dave Acres bearing down the line and chickened out, then got headed and missed the inner distance mark.  By the time I’d tacked round and crossed the line the fleet were merrily being led down the first beat by Dave having been, I assume, at exactly the right place in the line.

The first mark was in a section of the lake we call ‘The Cut’.  It’s a kind of long narrow canal of water accessed by an even narrower passage which funnels, amplifies and churns up the wind in a chaotic and challenging way.  We wanted to share the full experience of lake sailing with our sea-based compatriots who normally have that boring, constant, mono-directional breeze.  I think that everyone (except Dave) had a little swim either coming into or running out of ‘The Cut’.  At the front Dave and Tom Moore were having a tussle for the lead with Tom pulling away downwind until a mishap at the gybe mark resulted in a broken tiller extension (and a few choice words).  In the end, Dave sailed into a comfortable lead while Luke South and Rich Hargreaves battled it out for second, and I worked my way up from last to 4th.

For race two the grumpiness of fishermen forced a change of course and we abandoned our foray into ‘The Cut’ for a windward mark in the main body of the lake (maybe the RO also felt that if humorous capsizing were to happen it should be in full view of the clubhouse and the webcam?).  This time I opted to play it safe and start at the top of the line.  Everyone else went to the bottom and so I was at the back again at the first mark.  Tom with a ‘new’ RS700 spec tiller extension was again proving that even in big winds experience wins overweight…until a capsize allowed Dave, Rich and Luke through.  Dave accelerated off to become a small grey dot at the other end of the lake and not having anyone to follow, Luke and Rich got lost, eventually to be found in 7th and 8th places.  This allowed Tom, Chris Arnell and me to climb the ladder to 2nd, 3rd and 4th.

Occasional squeals indicated that Cheryl was having fun and local boy Phil Underwood from a neighbouring club was enjoying the strong winds.

Race three; the one where Dave capsized on the start line with one minute to go - it can happen to anyone right?  And Cheryl did a perfectly executed Port flier to sail right across the bows of the whole fleet!
After a cracking first leg, Phil was first to the mark followed by Chris, then Dave.  The gusty conditions were beginning to take their toll with Luke and Tom washing their sails.  Dave ended the day with a perfect three out of three wins.  Chris’s safe ‘n’ steady approach bought him a well-deserved 2nd, then it was Rich who was hunted down by Tom.  I rounded the bottom mark next and had a drag race with Luke for 5th.

As we were pulling my boat out (thanks for the assistance, I did appreciate it) we realised it was a little heavier than usual and the lack of a bung and torrent of water explains why I’d worked my way backwards through the fleet on that last race.  Kudos none-the-less to Luke for being a ‘hiking hero’ and pipping me on the line.

It was a fantastic day’s sailing.  I lost track of who capsized when.  I think everyone except Chris went for a swim at some point, some more than once.

The evening involved relaxing in the sun with free beer, chatting, eating a very tasty lasagne and wrapping up with cheese and wine.  Very civilised, we were all in bed by 9pm… honest.

The taps had been turned down a bit on the wind for today to a friendlier 11-16kts.  The RO declared that he would set a new course for each race, just to keep us on our toes.

Race one started without controversy and we were led round the top mark by Luke who then promptly retired with a broken tiller UJ.  The wind was less than the day before but the shifts were bigger, as Dave commented “so big the boat just tacks itself, just change sides and go”.  Local knowledge and lake sailing savvy began to pay off for Tom and me.  Tom won the first race from me, Rich then Dave.

Race two began with a simpler windward, gybe, gybe, round-up course (like a spiky number eight).  The shifts up the beat could make or lose you about 60 metres.  I had developed a comfortable lead before relaxing and not playing the shifts when Luke came screaming into the top mark on port and rounded right on my transom.  Luckily today I managed to hold him off on the sprint to the line to just get the bullet from Luke, with Dave and Tom following after.

Race three’s start was a bit of a mess.  The wind had moved south and the line was so port-biased that more than half the fleet where hovering at the bottom end so when the gun went there was a lot of looking for gaps which weren’t there.  Eventually everyone got moving and were led to the first mark by Dave who then proceeded to sail the previous course, having forgotten to heed the RO’s instructions and check the course.  He was followed by Luke and Rich.  Having sailed into last place Dave decided to retire and get an early lunch.  Rich and Luke corrected their course and gave chase to the pack.  By the final lap it was Luke, Tom, me then Rich.  Tom took the lead at the start of the downwind.  I was chasing down Luke and after the penultimate mark managed to get inside him and sail over the top.  There was a rare stable vein of breeze which lifted all of us the 80 metres to the bottom mark.  Tom hardened up and sailed on for 20m before tacking, I sailed on for 10m, Luke tacked immediately and headed for the line giving us a three way drag race to see who would win.  Despite a valiant comeback the order remained the same.  Dave Acres from Emsworth 1st, Tom Moore of Colesmere SC 2nd and Ben Heppenstall from Whitefriars SC 3rd.

Three Rooster National Tour prizes of special edition 2022 branded aquafleece neck gaiter were awarded.  First place sailor not to have already won one was Tom Moore.  Mid-fleet Hero prize went to Luke South of Emsworth who sailed well all weekend into 4th place and the Endeavour award went to Cheryl Wood from Pennine SC.  Thank you to Rooster for generously sponsoring out RS300 National Tour.

Thanks you to Whitefriars SC for hosting and feeding us, to Dave Whittle and Paul Sleeman for Race officering (and additional photographic services) and to Dave Rowson for being around all weekend to help out and crew the safety boat.  We really appreciate it.

Thank you also to everyone who attended, I had a great weekend.  It’s a real joy to sail in a class fleet with such fine and lovely people.  I hope you see you all soon at the Noble Marine RS300 Nationals at the RS Games.  Info here